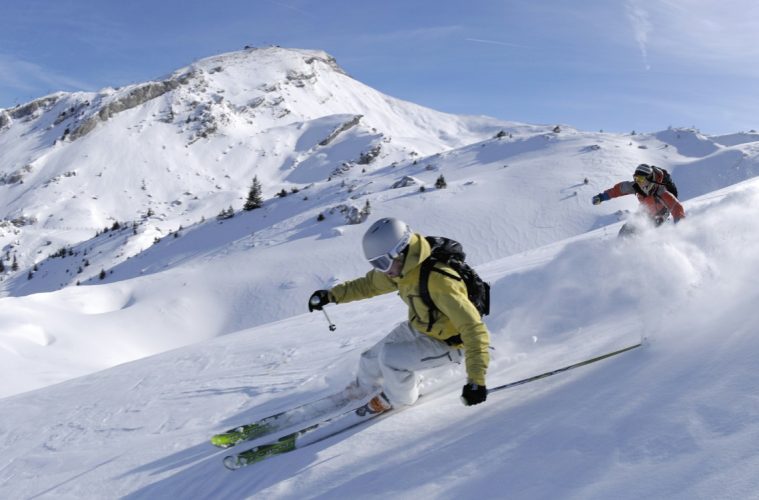 You’ve been working hard to improve your skiing technique and it’s finally time to take the plunge and buy some skis for yourself. You can only afford one pair even though you like a few different ski styles, so you’re looking for some top quality all mountain skis, which led you to this Rossignol Experience 100 review.

One of the ways we will conduct our review is by comparing the Rossignol 100 skis with the Salomon X-Drive All Mountain Skis and the Nordica Enforcer 93 skis to ensure that you get a full Rossignol ski review – including how this ski stacks up against the competition.

The Experience ski is nice for stability because it’s so stiff and heavy. These skis will stay on the ground while gathering quick speed. The edge hold of these skis is amazing, and although they’re not quite as stable at speed as the Salomon X-Drives, they’ve got significantly better edge hold than the Nordica Enforcers.

The upside to the Experience is that because they're so hefty, they perform really well at any speed. While other skis need speed to shine, these skis can handle slower skiing, which makes them nicer for intermediate skiers instead of just for experts.

The reason the Salomon X-Drives get the edge is that these skis aren’t as damp, so they chatter and vibrate quite a bit at speed if you’re not careful to stay on top of them. While the Nordica Enforcer's double-layered titanium edges offer some great stability and power, the Rossignol Experience 100s were ultimately better because skiers can more easily harness the raw power behind the ski.

When it comes to on-piste skiing, it’s hard to beat the Rossignol Experience. Even the Salomon X-Drives aren't as awesome at carving as these skis. The X-Drives were built for versatility and the Experiences were clearly built for grooming then tailored to fit all mountain skiing afterward.

The Enforcers actually take the category here, though. When it comes to carving performance, the Nordica Enforcer 93 skis feel like they were built exclusively for this category. They can’t be outpaced by any ski we’ve tested on the market at all. It’s extremely friendly for users and begs to be laid out on the edge.

That doesn’t mean that the Rossignols aren’t also fun on carving. They’re a more versatility and stable ski, so although they don’t go edge to edge as quickly as the Enforcers, they’re much easier to control for less experienced skiers. They still transition quickly from edge to edge – especially considering the 100mm underfoot. These skis have some great edge hold and stability.

If you want o stay on the ground while you make a lot of small and medium radius turns, then you will love the Rossignols almost as much as the Salomon X-Drives. They’re not race skis, but they are very responsive and have a lot of pop so you can play around and vary your playfulness. They do require an aggressive skier to maximize carving ability, but they can handle lighter skiers.

When it comes to the powder, the Rossignol Experience 100 skis fall flat. The wide tip seems like it would get plenty of float, but it didn’t. Even the early rise tip couldn’t save these skis from sinking into powder.

The Salomon X-Drive All Mountain Skis offer a lot more float through the powder. These skis were built to be versatile in any condition, and that versatility really shines through in this category. Even the Nordica's came out ahead of the Rossignols here, though. As long as the powder was measured in inches instead of feet, the Nordicas were well able to stay atop ad float with ease in powdery conditions.

The Rossignol Experience 100s are just too stiff to bounce around well and asking too hard to get on their edges and open up to float well in conditions that don’t call for carving and grooming.

When taken off-piste the Rossignol Experience skis can handle it… but only if you’re a very strong skier. These aren’t comfortable going quickly in variable terrain despite their comfort at speed on-piste. Their wide tail twitches because of the upward hook when they hit skied up snow.

The Salomon X-Drives do better because they’ve got more rocker and a much less aggressive shape to them, which makes it easier to ski them through a variety of terrains. The Nordica Enforcers also beat the Rossignols in this category thanks to their proportional blunt-nosed tip design, which can break through the chunder.

The Rossignol ski is extremely playful if your definition of playtime is carving through the groomers. It does that amazingly well and without requiring too much skill to handle. These skis are still less playful to than others in their category, though, because they can occasionally feel like a one-trick pony.

They don’t have the ability to adapt well to sudden changes and they like staying on the ground and the edge. It takes more work than it’s worth to use them off-piste, so that removes the play factor. That being said, the stiffer flex does give them a bit of pop, which can be fun.

These skis are also not quite as playful as the Nordica Enforcer 93s, either. You wouldn't think the Enforcers would win given their double layer titanium, but they do have a bit of pop and play to them when you open them up on the mountain.

The Salomons are the winners again when it comes to playfulness. They’ve got some great pop, and the flex pattern is perfect. This lets you take them just about anywhere, even if you just want to take them to the ski park for some tricks.

The Rossignol flex pattern is very stout, especially in the tail of the skis. The Enforcers are also pretty stiff underfoot and through the tail. Even the X-Drive is a very stiff ski. None of them really have an edge here, except that the Salomon performs better than either of the other skis in powder and tends to float a little better thanks to the tails not being quite so hooky.

These skis are pretty exciting for bump skiing. They are stiff and hooky, which means you will work hard on a lap through the bumps to control them at the speed they’re running for. They have some trouble releasing quickly enough from turns to be great bump skis, but they’ll do in a pinch as all mountain skis if you don’t mind a bit of hard work for your bump line.

They’re still better than the Nordica Enforcers in this category. The Enforcers can pivot well enough for bump lines, but they’re also very clumsy so only expert mogul skiers would be able to handle these. Once again, the Salomons prove that they’re a great all mountain ski. They can handle pretty much any type of bump line, though it is advisable not to get too carried away with them.

The best application for the Rossignol Experience 100 skis is groomed runs. This is a fantastic all-mountain ski that feels at home on-piste but has the capacity to take some short exploration trips off-piste when you want to have some extra adventure.

These skis thrive when they can feel the snow pressed firmly against them. The strengths in this snow outweigh the weaknesses. The stiff ski and quickness and stability on edge don't do quite as well off-piste as on, and that makes for a bit of a bumpy ride in choppy conditions.

In the soft snow, they really fail because they dive underfoot instead of floating to the top and their wide tail prevents you from jumping out of turns quickly.

The Enforcer, on the other hand, is best used to carve. They are made for hardpack snows but can perform well in a lot of different places. They're much more versatile all mountain skis.

This brings us around to the Salomon X-Drive, whose purpose seems to be making everyone else look like they don’t belong in the same category. The X-Drive is still our pick for the best all mountain ski because it is unparalleled when it comes to versatility. In fact, that's its best application – all mountain skiing!

While the Salomon X-Drive ski doesn’t win any one category by a landslide, it can hold its own against all these other skis in all of the categories, winning against them in weaker ones and nearly matching them in strengths. This makes them clear favorites in an all mountain category.