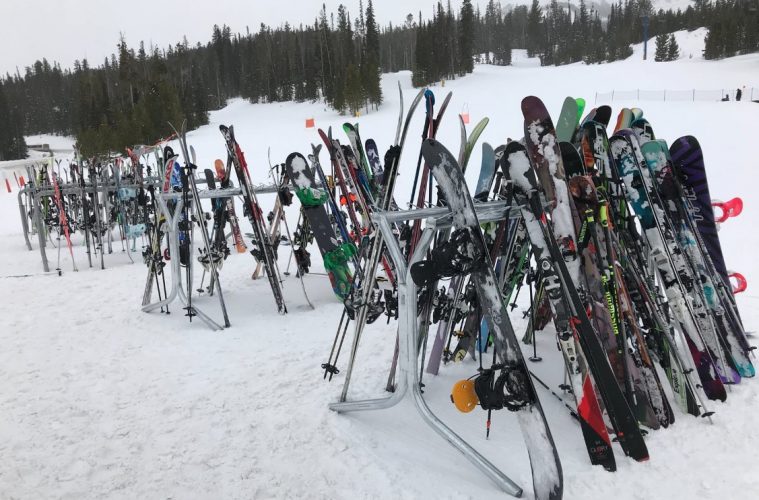 You started with rented skis on an impromptu vacation, but you quickly became hooked. Before you knew it, you were learning all kinds of tricks and progressing from bunny slopes to diamonds. Looking for a challenge, you tried several different types of skiing and now you're ready to upgrade to a professional-grade pair of skis for yourself. You don't have the money to spend on several pairs, so you're looking for one ski that can do everything. The best all mountain skis reviews have led you to our Nordica Encourcer 93 review.

The Nordica Enforcer skis were extremely popular when they were introduced. They debuted to rave Nordica Enforcer reviews and won so many versatility awards with the Enforcer ski 100s that Nordica decided to slim the skis down even more to make a 93 series. Usually, the new widths cause the skis to experience issues but this isn’t the case here. The Enforcer ski is just as awesome at the 93 size.

The measurements and cambers earned it another top pick award, especially for its on-piste carving. We love the ski almost as much as the Salomon X-Drive, and definitely more than the Rossignol Experience! In fact, these almost managed to topple the Salomon as our new best in class skis. The only thing that held them back is that the Salomon skis are still more versatile and playful than the Nordica skis when it comes to all mountain skiing experience.

These skis are incredibly stable. They’ve got a full wood core plus two layers of Titanium that extend out over the ski edges. This design gives them plenty of flex and a consistent ride from tip to tail while ensuring stability and power. Unlike the Rossignol Experience, these skis don’t overpower their skier either. You are very easily able to harness the power for an insanely fun ride!

These skis are also less susceptible to tip chatter than the Rossignol skis are. They're reliable and consistent. Although they're not as stable as the Salomon X-Drives, they are still skis that can easily be pushed to the limit of your speed capability.

These skis are amazing!!!! Seriously, the Nordica Enforcer 93 skis are made for carving. We would put these head to head with any other ski we have reviewed, including the Salomon X-Drive, the Rossignol Experience 100s, the Head Kore 93s, and the Rossignol Soul 7 HDs, and none of them compare to the carving experience of these skis.

The Enforcer 93 is a very user-friendly ski. The ski is begging to be laid on its edge and the transition from one edge to another is ridiculously smooth and easy. The turns arc with unmatched power while still being easy to control. These skis want you to enjoy the ride and don't fight to overpower your will or direction.

They have a great turn radius at 18.5 meters, but pretty much any size or shape of turn can be easily achieved in any direction with these skis, which have unlimited potential. The Rossignol skis just can’t handle the same turn range and control as these when powering through arcs.

The tip rocker is pretty mellow, which means you can get almost a full edge contact when you drive these skis. On the other end of the ski, the tail rocker is slight, so it lets you easily release out of your turns no matter what speed you take them.

Although the Nordica Enforcers have won this category, it is important to note that we are evaluating these as all-mountain skis and this is their best category. The Salomon X-Drives are also very easy to maneuver. The C/FX reinforcement goes all the way from edge to edge so you get a stable underfoot with a tapered tip and tail. Combined with the full sandwich sidewalls, this allows for a very solid edge grip and smooth contact when carving on these skis, too. Just because they don’t do quite as well as the Enforcers doesn’t mean they can’t handle carving with ease.

The Enforcer 93 ski doesn't have the same capability for busting through crud at the tip as the Salomon X-Drive, so they are outperformed in this category. That being said, they do have a proportional tip with a blunt-nosed design, which does work well for busting through the chunder. This still puts them way ahead of most of the other skis in this category, including the Rossignols.

These skis feel pretty comfortable in just about any type of crud, but in chopped powder, it can get pretty rough.  They can handle refrozen chunder and ice very well, but these skis will deflect quite a bit and get tossed around in chopped crud. The Salomon X-Drives offer a much smoother ride across all different crud types.

These skis weigh in at 2114 and 2133 grams, as compared to the Salomon’s 2131 and 2141 gram weight and the Rossignol’s 2036 and 2063 grams. This makes them lighter than the Salomon but heavier than the Rossignol, and their performance reflects this.

The Enforcer has a pretty stiff flex through the tails and underfoot, but the front half of the skis are harder to break down thanks to their design. The tips are roughly 6.5, with the shovels at 7 to 8. Underfoot is 10, and the front of the toe piece is 8.5 to 9.5 with the behind the heel piece at 8.5 to 8. The tails are 7.

These similarities made me initially worry that the success of their Enforcer 100s drove them to simply shave some measurements off and cerate a skinnier ski without fixing the other dimensions. After all, just shrinking the side specs doesn't always work. The good news is that they tested a lot of prototypes and adjusted everything else for a great ski.

The Salomon’s flex is a little more playful than the Enforcer. It offers a lot more pop and height through jumps and tricks and can be a bit more forgiving at times. This being said, they are designed for different purposes.

The flex pattern of the Salomon is better for all mountain versatility, but the Enforcers can outperform them in some categories.

These Enforcer skis are amazingly fun on groomers. That being said, they don't bend quite as easily as the Rossignol, especially at slower speeds. The Enforcers can handle the groomers, and they're not too demanding, but the edge hold is much better at speed. You can tell that these were designed to be pushed hard and fast.

Slowed down, the Enforcers can handle shorter turns but they don’t excel here the way that the Rossignol Experience skis do. The Rossignols are some of the best skis when it comes to grooming. These are fun and impressive at carving thanks to their hammerhead tips and extended sidecuts. These are smooth and clean turns that initiate quickly.

The Nordica Enforcers can handle steeps pretty well. They’re very capable all mountain skis, and you can tell that on these days. Even in firm, fast, and challenging conditions these skis can perform. They offer excellent comfort, and you’ll feel confident and stable on these skis. These make really rough conditions feel great and easy to handle. 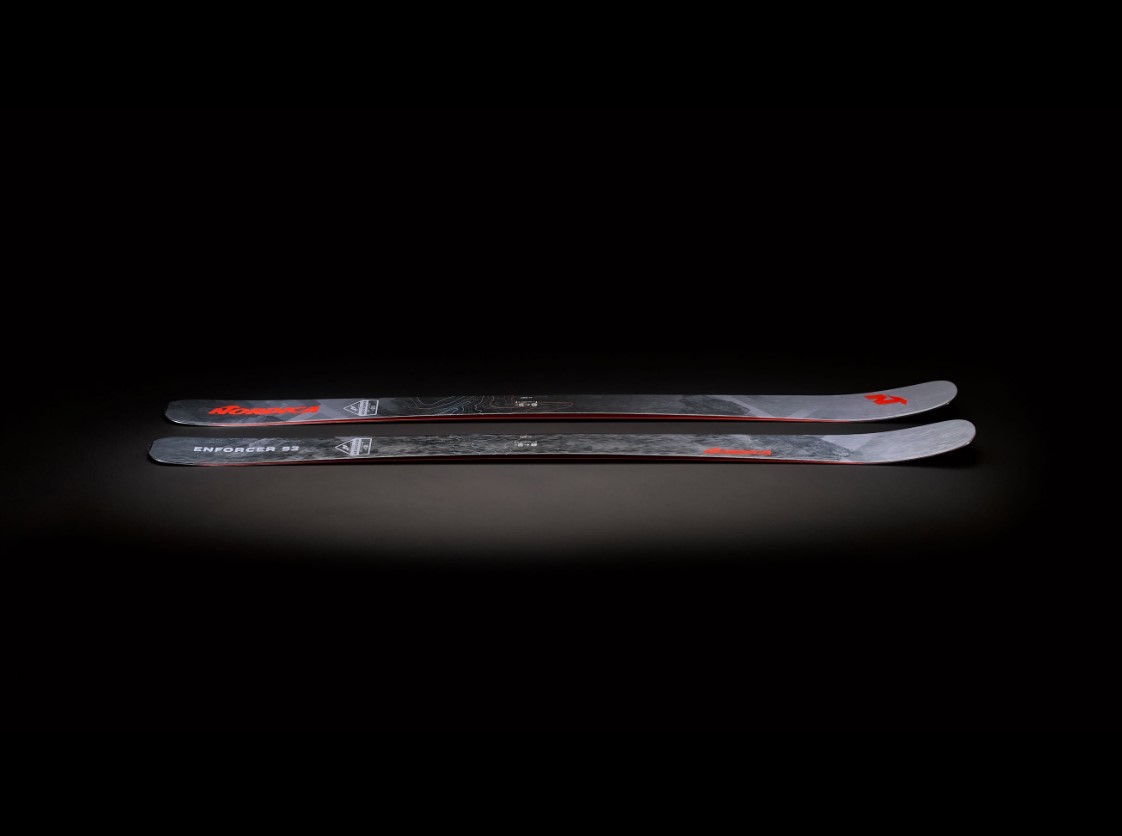 These skis offer significant stability underfoot without demanding too much muscle from the skier. They offer some great bite, especially for such a rockered tail, but let you break your tails out when necessary.

The Salomons and the Rossignols also performed pretty well on the steeps. The Rossignol didn't do quite as well as the Enforcers or Salomons, because when things got narrower, these skis were not very quick or easy to bring around and the tails are too fat to smear or pivot well through tight spaces. These are going to make you commit to hanging near the fall line instead of smear turning down the hill.

These skis are amazing in powder, too. They can handle even 6 inch powder days very easily. You may want to grab a ski with a bit more surface area underfoot, like the Salomon X-Drives, but if these are your only pair of skis they can handle the fresh powder better than you might imagine.

The Salomon X-Drives were made for this type of softer snow, and they will be your best bet, but the Nordica Enforcer 93s still do much better than the Rossignol Experience 100s in this type of weather.

These skis weren't designed specifically for deep powder because they're all mountain skis that are meant to be competent in all categories rather than the best in any one area. The rocker tip does provide some float and the rail offers a ton of great maneuverability in soft snow, but on the deepest days, we miss the extra width underfoot that both the Salomon and the Rossignols offer. These bottom out pretty hard on the harder snow under the powder.

As the last word, I would say that they can handle powder very well if you're talking about inches wort of fresh snow. If, on the other hand, you get an amount of fresh powder that is measured in feet, these are probably going to be difficult to handle.

They still perform much better than the Rossignol 100s. The wide tip on these skis is deceptive about the float you get. The early rise tip offers very little lift in the powder, which makes it difficult for these skis to stay on top of it. They’re also too stiff to bounce and too ready to go on edge to open up well in powder.

The two layers of titanium are unlikely to scream, “Playful!!!!” That being said, these Enforcers really surprised us in this test. They’re not as poppy or forgiving as the Salomon X-Drives, but they’re more towards the middle of the pack in this category instead of at the bottom, as the metal might suggest.

The flex is pretty stiff, but it's also consistent throughout the entire ski so you can find your pop in the right condition with the right pressure. The maneuverability of these skis adds to the overall playfulness score, too, because you can whip back and forth pretty easily and even land switch from time to time.

The Rossignol 100s are pretty playful when carving down groomers. They're quick and snappy. Unfortunately, in the overall picture, they're not very good at adapting to the terrain. These skis definitely prefer to stay on the ground and offer almost no pop or play. It takes a lot more effort than it's worth to get these skis off-piste.

Nordica Enforces are not made for bashing through bumps. These pivot well enough, but they’re also very clumsy. The Salomon X-Drives are much better at bump bashing than either the Nordica Enforcers or the Rossignol Experiences.